Home » Press centre » Countries of Latin America and the Caribbean Call for Driving Action and Moving Towards Achievement of the Ageing Agenda on a Regional and Global Level
Available in: EnglishEspañol

The Fifth Regional Intergovernmental Conference on Ageing and the Rights of Older Persons was inaugurated today at ECLAC’s headquarters in Santiago, Chile.
13 December 2022 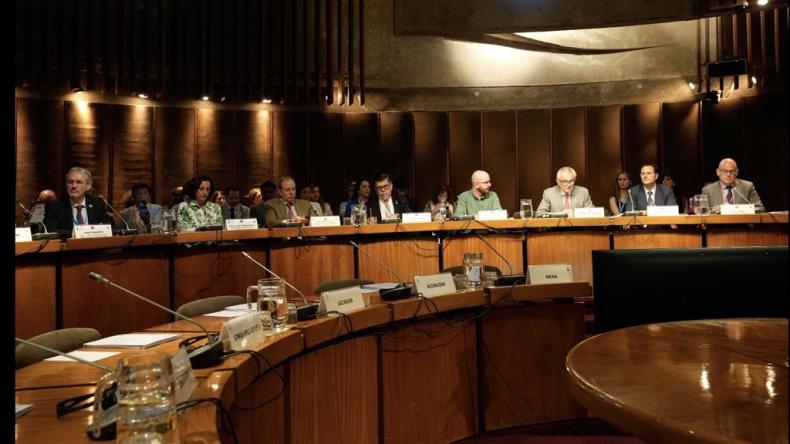 Representatives of Latin American and Caribbean countries called today for driving action and advancing towards achievement of the ageing agenda on a regional and global level, at the inauguration of the Fifth Regional Intergovernmental Conference on Ageing and the Rights of Older Persons, which is taking place through Thursday, December 15 at the headquarters of the Economic Commission for Latin America and the Caribbean (ECLAC) in Santiago, Chile.

In his opening remarks, José Manuel Salazar-Xirinachs, ECLAC’s Executive Secretary, highlighted that Latin America and the Caribbean has a powerful battery of instruments that are a demonstration of the commitment to implementing the Madrid International Plan of Action and that complement the United Nations’ 2030 Agenda for Sustainable Development and Decade of Healthy Ageing 2021-2030.

He recalled that population ageing is one of the main demographic phenomena in Latin America and the Caribbean and in the world. He emphasized that 662 million people are living in the region as of 2022, 13.4% (88.6 million) of whom are people aged 60 years and over. By 2030, this proportion will rise to 16.5% of the total population, and by 2050 older persons will represent 9 percentage points more, reaching a quarter (25.1%) of the total population.

“The increase in the proportion of older persons, along with prolongation of the life span, entails new opportunities and challenges for societies and multiple challenges in terms of public policy. We must universalize older persons’ access to social protection and quality health services. It is also urgently necessary to focus special attention on the issue of care,” he stated.

The senior United Nations official stressed the need to address lifelong learning, with an emphasis on retraining and closing the digital divide.

“We must promote the inclusion of ageing on government agendas through legislative adaptation and modernization and by strengthening the institutions responsible for coordinating national policies that address ageing,” he indicated, urging as well for strengthening countries’ technical capacities with regard to the challenges entailed by the demographic change.

“Twenty years since the Madrid International Plan of Action was adopted, the challenges for its implementation in our region continue to be numerous and urgent. But our commitment to overcome them and find responses in order to leave no older person behind is resolute and enduring,” ECLAC’s Executive Secretary concluded.

Giorgio Jackson, Minister of Social Development and Family of Chile, the country that serves as Chair of the Fifth Regional Intergovernmental Conference on Ageing and the Rights of Older Persons as of today, recognized the importance of this meeting, primarily its embodiment of south-south cooperation, and urged countries to fulfill the commitments they have procured on an international level.

“States have to implement more demanding, more suitable public policies that would effectively improve the lives of older persons,” he affirmed.

Meanwhile, Julio César Borba, Minister of Public Health and Social Welfare of Paraguay, stressed that the link between human rights and older persons acquires greater relevance to the extent that population ageing is the most important social transformation of this time, both in the world as well as in Latin America and the Caribbean.

Jozef Maeriën, Chief of the Regional Office for Latin America and the Caribbean of the United Nations Population Fund, reaffirmed that the region is undergoing a rapid demographic change with an accelerated ageing process, and he encouraged society and governments to prepare themselves to face the challenges of that scenario “marked by profound inequalities and limited fiscal resources.”

Meanwhile, María José Torres Macho, UN Resident Coordinator in Chile, stated that older persons face challenges that are multidisciplinary and that encompass not only the issue of poverty and access to health, but also matters related to the exercise of their political, social and environmental rights.

Following the opening ceremony, Simone Cecchini, Director of the Latin American and Caribbean Demographic Centre (CELADE)-Population Division of ECLAC, presented the document Ageing in Latin America and the Caribbean: Inclusion and rights of older persons, which constitutes the regional report for the fourth review and appraisal of the Madrid International Plan of Action on Ageing, 20 years after its approval.

LIVE TRANSMISSION Full document: Ageing in Latin America and the Caribbean: Inclusion and rights of older persons Photo gallery Website of the Conference Full programme of the meeting